You are at Home News BBC launches 2018 Komla Dumor Award

The BBC is seeking a rising star of African journalism for the BBC World News Komla Dumor Award, now in its fourth year.

Journalists from across the continent are invited to apply for the award, which aims to uncover and promote fresh talent from Africa.

The winner will spend three months at the BBC headquarters in London, gaining skills and experience.

The award was established to honour Komla Dumor, an exceptional Ghanaian broadcaster and presenter for BBC World News, who died suddenly aged 41 in 2014.

This year’s award is being launched from the Ghanaian capital Accra.

It will be made to an outstanding individual living and working in Africa, who combines strong journalism skills, on-air flair, and an exceptional talent in telling African stories with the ambition and potential to become a star of the future.

As well as spending time with the BBC in London, the winner will also get to travel to Africa to report a story – and have that story shared across the continent and the world. 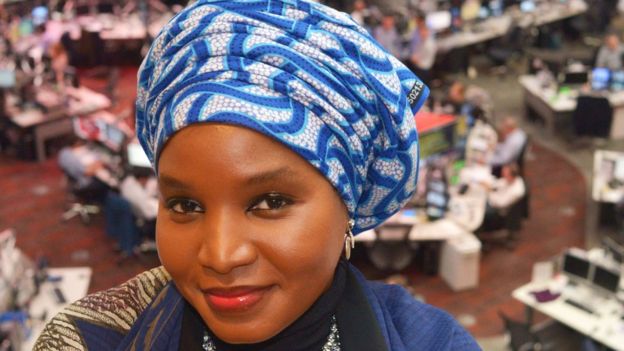 Previous winners of the award are Nancy Kacungira from Uganda, Didi Akinyelure from Nigeria and Amina Yuguda, also from Nigeria.

For her main project, Amina reported from Uganda on the threat facing Lake Victoria, Africa’s largest freshwater lake, which scientists warn could be dying.

“Being the winner of the 2017 BBC World News Komla Dumor Award felt like the beginning of my career. Getting an international platform, to be recognised at an international level, it’s like I arrived,” Amina said.

“During my placement, I learned the importance of truth, balance and fairness, and gained invaluable insights into how to give African stories a global appeal.

“We are proud of how Komla represented the continent to the world, and I feel honoured to be helping continue that legacy.”

Amina will take part in the 2018 launch event, alongside Jamie Angus, director of the BBC World Service Group.

Speaking ahead of the launch, he said:

“It’s an honour to be here in Ghana, in Komla’s homeland, amongst his family and his friends, to celebrate his legacy and find Africa’s next rising star in journalism.

“The three previous winners – Nancy, Didi and Amina – have all shown they’re talented journalists, with a deep-rooted understanding of the continent, and insights in how to improve engagement with local audiences.

“We’re looking forward to finding another exceptional journalist from the continent and welcoming them as the next BBC World News Komla Dumor Award winner.”

Too many people wasting in our Prisons – LRC